I wish everyone a joyous and blessed holiday season and start to the New Year. As my own method of celebrating, I’ve published a new book, the second in the Home Again Series.

Computer nerd Rosalie Missen has been in love with hunky carpenter Clint Carmichael for years. But he only sees her as a friend. In fact, he even married another woman during Rosalie’s long infatuation. But now he’s single again, and Rosalie wonders if there’s any way to inspire Clint to view her romantically. If only she were beautiful.

Clint feels responsible for the breakup of his marriage, even though it had been a shotgun affair and probably not destined for eternity. But he’s the emotional fixer, the guy who makes everybody happy. He should have been able to make his ex happy. And now he’s apparently failing to please his best friend Rosalie. She’s behaving oddly and thinking of moving away. Leaving him behind. He frantically searches for a way to convince her to stay. He’s willing to do anything.

Anything except risk his heart.

This book is currently available at Amazon, Smashwords, and Apple. Coming soon to Barnes and Noble. 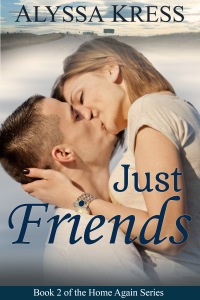